Is Phoenix Running Out of Water?

How is it possible that a city of nearly 5 million people in the middle of the desert, with only 8 inches of rain per year, is able to not only survive, but thrive? The reality is over the last several years Arizona main water source, the Colorado River and the Lake Mead reservoir, have seen levels decline drastically. So what happens if/when these sources dry up? Does this spell doom in the coming years for the 5th largest city in the country, or is it much to do about nothing?

Before we see where we are headed, we have to take a look at the past. The Hohokam were ancient people who lived in what is now Phoenix. Their civilization was known for its farm fields irrigated by the Salt and Gila Rivers through a series of carefully designed and calibrated canals – the only known prehistoric culture to have such an advanced farming system.

Sometime in the 13th century a major drought hit the region, which is believed to be the primary cause of collapse of the Hohokam. Knowing the fate of the Hohokam, Phoenix has found itself planning to avoid a similar fate.

Formally finished in 1993, the Central Arizona Project (CAP) is the 17 foot by 80 foot wide concrete aqueduct built to pump water from the Colorado River to Phoenix, Tucson – a man-made river if you will. This is our modern day version of the Hohokam’s canal system, which pumps water a total of 336 miles across central and southern Arizona. 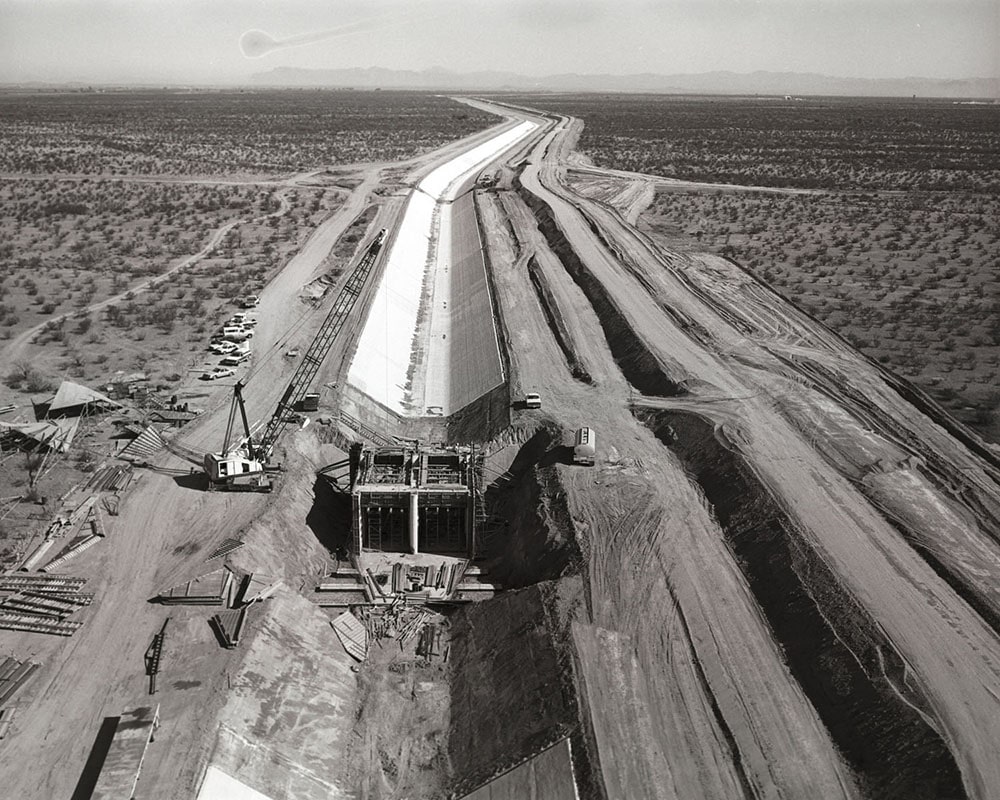 Construction of the Central Arizona Project – 1988

Well, Phoenix is not alone in this problem.  LA, San Diego, Albuquerque and Las Vegas all rely on the Colorado for at least some of its water. In fact, Las Vegas gets a whopping 90% of its water from Lake Mead, so they are much more exposed than Phoenix in a full draining of the reservoir situation. 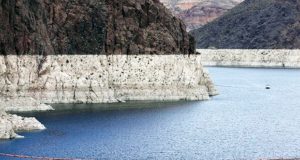 Vegas had originally tapped into the lake for water in 1971. In the early 2000’s when the water dropped, the city placed a second deeper straw to replace the original.  As we’ve moved into further drought levels, a third straw replaced the previous outtakes in 2015, which was set over 200 feet below surface level of the lake.  This third tap will continue to provide water to Las Vegas if, or until, the lake dries up – becoming what’s known as a “dead pool”.

Back in Phoenix while the CAP is a major water source, the Salt River is actually the biggest single source for Phoenix metro, supplying about 60% of our water.  However, the real issue is that parts of the north valley are serviced from the Colorado River water through the CAP exclusively.  So if the Colorado River dries up, major infrastructure enhancements would need to occur to tap into the Salt River water source for parts of the valley. Plans for funding to put this infrastructure in place have come in the form of proposed water rate hikes, but have recently been shot down on ballots by the voters.

No doubt the CAP drying up would be troublesome on the city, but we’ve actually been planning for a major drought event for years. In 1996, Arizona launched a unique system of underground water storage systems known as the water bank.  The goal was to start retaining water that Phoenix was not using at the time that, that otherwise would keep on flowing into California and be gone. When it was first built, a Colorado River shortage was not a big concern, so this shows quite a bit of foresight on Arizona’s behalf – well done! 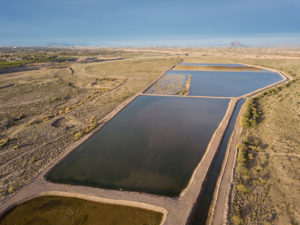 One of the many water banks and storage reservoirs in the Phoenix area.

Since then, Arizona has created a total of seven water banks, primarily in underground aquifers. The aquifers are holding about 3.6 million acre feet – equivalent to more than a years’ worth of full Colorado River water flow.

In addition to this added manmade clean water storage, there are other aquifers under Phoenix with almost 90 Million acre-feet of water, which could last for several years.  The only obstacle to tapping into this water, is much of it is contaminated from natural sources, and some of the cities Superfund sites around town (Superfund sites are manufacturing sites polluted by industrial solvents).  This requires special processing to use this water, but nothing that would render the water useless.

Desalinization of seawater has always been considered as a possibility for Arizona.  Although it’s expensive and produces a lot of waste, the technology is available.  Another option being considered is “toilet to tap” technology, which make sewage water completely safe and drinkable. It sounds gross, don’t get me wrong, but this technology is already being used in a few places, including San Diego.  The biggest hurdle with this plan? Getting it approved by voters.

For now, Phoenix has positioned itself quite well for an inevitable drought. Thankfully, water conservation has gone mainstream, and it’s really paid off. Phoenix currently uses almost the exact amount of water it did 20 years ago, even though it has added almost half a million people. We are using 30% less water per capita than 20 years ago. Additionally, commercial farming consumes a lot more water than residential use. As farmland gives way to new home developments, we are actually saving water, even if we are adding more residents to the area.

Only time will tell how bad the drought will be, or how long it will last. As the cycles of Mother Nature come and go, Arizona has several contingencies in place to ensure the continued prosperity of our cities. 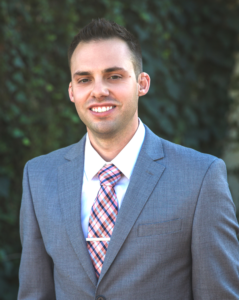